Recent Arrivals
Terrific new artwork arrives at our gallery on an almost daily basis, so we'd like to say a word or two about several outstanding treasures that have graced us with their presence.

First, is an oil painting by the French artist Adolphe Joseph Thomas Monticelli (1824 - 1886), "Figures."  Monticelli painted in a very unique and original way, and was highly successful as an artist in his lifetime.  He was associated with the French Barbizon painters, and later shared friendships with Paul Cezanne and Vincent van Gogh, amongst others.  The Portland Art Museum currently has 2 of his paintings on view and he is in the permanent collections of all the major American and European museums.  This painting belonged to C.E.S Wood and was one of a group of paintings by Monticelli that Wood owned and lived with.  This painting has remained in the Wood family until very recently.  It is presented in it's original frame, a stunning, ornate 8" wide gold leaf frame, which is beautifully decorated and composed of many layers.

Secondly, we mention 3 extraordinary pieces of pottery by Gertrud (1908 - 1971) and Otto Natzler (1908 - 2007).  The Natzlers are famous for working collaboratively to produce pottery of exceptionally high quality. Gertrud and Otto met in 1933 in Vienna, Austria. They were self taught artists and started showing their ceramic work in 1937. The two married in June of 1938, before fleeing the Nazi occupation and moved permanently to California in September 1938.  Gertrud created the forms and Otto glazed their pottery, developing a highly individual process of making pottery with delicate, paper thin walls.  Otto produced glazes that are incredibly unique and original in their beauty, in a wide range of colors and textures.  In 1999, Modernism Magazine wrote, that the Natzler's work was "among the finest pottery of all time."  Their work is included in the permanent collections of the Metropolitan Museum of Art, the Museum of Modern Art, the Los Angeles County Museum of Art, the Victoria and Albert Museum, the Portland Art Museum, and many others.

Lastly, we should mention the lovely Pablo Picasso Madoura ceramic plate from 1948.  Lots to come and see!

Lillian Bain (1873 - 1949) - Etchings and Paintings
It is a great pleasure to offer a collection of etchings and paintings by the early day Impressionist landscape painter and etcher Lillian Bain, whose work is extremely rare.  The 13 etchings explore a range of print making styles including dry point and aquatint, with most of the prints dating from the 1920's and 30's.  Bain was a student of the famed American artist Frank Vincent Dumond at the Arts Student League in New York, where she remained his assistant for more than 10 years, also teaching children's classes at the Metropolitan Museum of Art.  Upon returning to Oregon, she taught at Pacific University in Forest Grove.  We are also featuring 3 of her oil paintings.

One of the great pleasures of visiting the National Gallery of Art in Washington DC has always been the show of small paintings the Museum puts on each year.  Originally drawn from the collection of Ailsa Mellon Bruce, and conceived as a one time exhibition, the show was so well received that it soon became an annual event at the Museum; and before the East Building was recently closed for renovation, the small painting show had become an ongoing part of the Museum's daily offerings, with new additions made regularly from the Museum's vast holdings.  There is a high level of enjoyment and great satisfaction attainable from small paintings.  So often small paintings are unabashedly beautiful in their spontaneity, and without any pretense whatsoever.  Other times, small paintings make great statements and express ideas far beyond their modest physical size.  ln this spirit we offer our April show, "Little Gems - Small Paintings By Northwest Masters."

Our small painting show includes oils by many different Northwest artists, some of whose work is quite rare. There are a wide range of painting styles, exploring 125 years of our region's art history.  The earliest example is a pair of lovely paintings of the Snake River territory by the itinerant artist Decost Smith, c. 1890.  There is also a terrific Myra Wiggins oil titled "Still Life with Metals and Glass";  a colorful landscape by Lance Wood Hart called "Satsop River" from 1921; a high quality landscape watercolor by C.E.S. Wood; and a still life of Red Roses in a clear glass vase from 1903 by Josephine Hayne.  We are proud to offer a circa 1920's painting by C.S. Price called "Homestead", a significant painting by Anne Kutka McCosh from the 1930's titled "Kitchen Still Life", and a 1930's oil by Andrew Vincent of an Alaskan Coastal Village.  Other items include a modernist painting of Jazz Musicians by Jefferson Tester, and the angular Streets in San Miguel by David McCosh (1950).  Additional artists in the show include Harry Widman, LaVerne Krause, J. Leo Fairbanks, Eustace Ziegler, William Givler, Carolyn Dewey, Melville Wire, Louis Bunce, Eva Ford Cline Smith, Arthur and Albert Runquist, Hank Kowert, and Jay Steensma, amongst others. 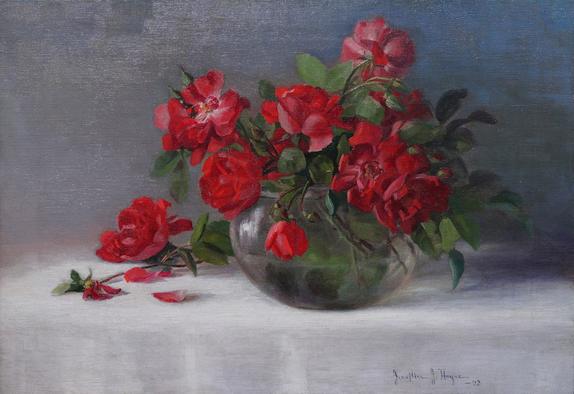 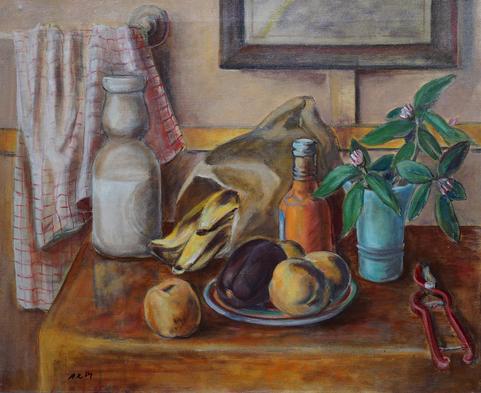 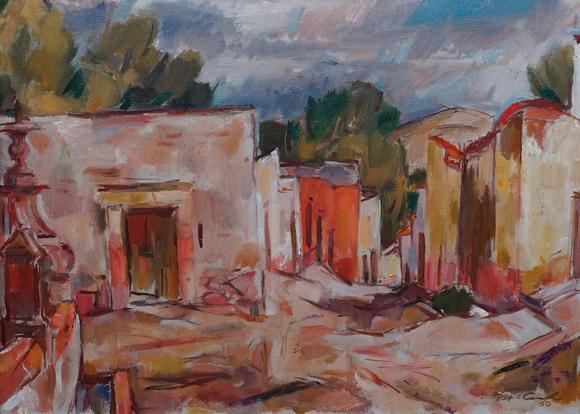 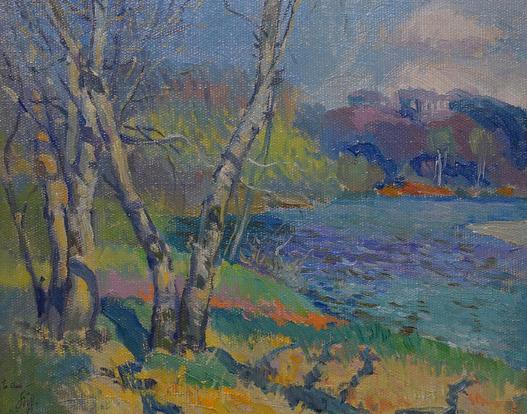