Howard Sewall remains one of Oregon's most intriguing artists.  Like another well known Oregon artist, Louis Bunce, Sewall possessed a tremendous intellectual curiousity about new ideas in art, and worked in many different styles throughout his long and productive career.  Of particular interest to Sewall, was European modernism, and his work from the 1940's through 1960's often shows the influence of Matisse, Giacometti, Modigliani, and cubism.  Our show of works from Sewall's estate explores this aspect of his work, Mid-Century Modern.

Sewall was born in Minneapolis, MN in 1899, and was a founder and member of the Washington School of Art in Washington D.C. in 1915.  He moved to Portland in 1920, where he studied with the well-known Oregon artist and painter of Mt. Hood, Eliza Barchus (1920 - 21), the Oregon impressionist landscape painter Clyde Leon Keller (1925 -26), and the Royal Academy trained English artist and portrait specialist Sidney Bell ( 1927 - 28).   Sewall kept a studio in downtown Portland for many years, first in the Worcester Building (1930's), where his neighbor was the famed Oregon modernist painter C.S. Price, who was Sewall's good friend and teacher, becoming a major influence on the developing younger artist.  He also had other studios in downtown Portland, including the Kramer Building (1940's), the Selling-Hirsch Building (1950's), and the McKay Building (1960's).  It is interesting to note that Sewall considered himself self-taught, even though he had several years of formal art training, and a distinguished list of teachers.

Sewall worked on the WPA Federal Art Project  from 1935 - 1942, creating art that is still on view at Timberline Lodge, as well as a series of 16 murals for Oregon City High School.  He also taught (1941) and exhibited (1939 - 40, 1942) at the Salem Art Center (WPA).  Sewall was an Artist Member of the Portland Art Museum and exhibited there regularly for more than 20 years.  He also worked as a commercial artist throughout most of his career, and taught art in his various downtown studios.  Sewall exhibited at the Architectural League in New York City (1936 - 38), the American Artists Professional League (1937 - 1939), and the Smith Tower in Seatlle (1940). The Multnomah County Library has a wonderful collection of his library patron drawings, which are often on display.  The Oregon Historical Society presented a major retrospective of his work in 1978.  Sewall's work is in the permanent collection of the Portland Art Museum, and Hallie Ford Museum of Art, Salem; Pacific University, Forest Grove; and many distinguished private collections.

In addition to making art, Sewall had many other interests.  He produced textiles and hand loomed rugs, was a professional Spanish dancer, a singer, and an impersonator.  Sewall once commented, "Experimentation (made) the most remarkable teacher."  Howard Sewall passed away in 1975.

The eclectic nature of Sewall's creativity led him to work in many different mediums.  These include oil painting, color monoprints, watercolor, linocuts, pencil drawings, etching, pen and ink drawings, and gouache.  In addition to the 20 framed works which fill the upper room of the gallery, there is also a portfolio of unframed framed works in a variety of mediums and styles.  These unframed gems are affordably priced, creating the opportunity to collect the work of an important mid-century Northwest artist, on most any budget. 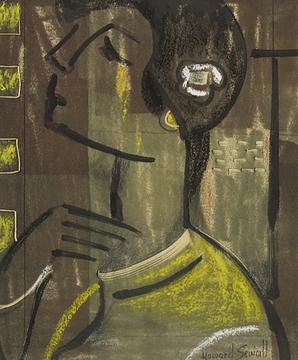 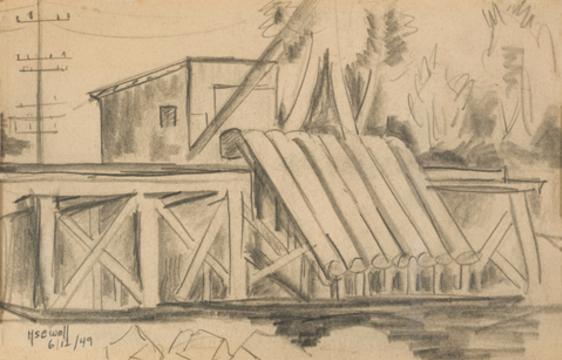 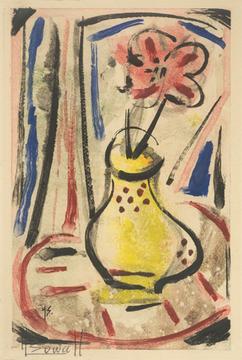 Woman in a Blue Dress 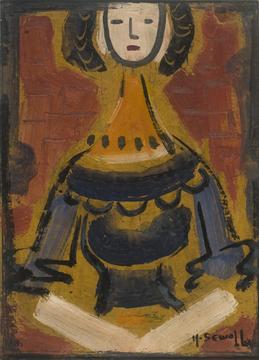