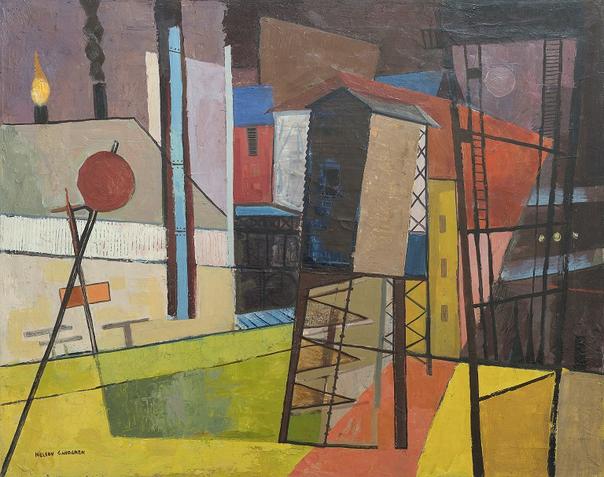 Our Nelson Sandgren show presents an equal mix of oils and watercolors, mediums Sandgren was equally adept at.  The earliest work in our show was produced in 1943 and is called "Eugene."  This painting predates his move to Corvallis and shows the influence of Lance Wood Hart, a fine painter from Aberdeen, Washington, who taught at the University of Oregon at that time.  Another Eugene period painting," Florence," was painted in 1946, on a painting trip to the Oregon coast with Andrew Vincent. Vincent was the head of the art department at the University of Oregon and also a very good artist.  In 1948, at the urging of artist David McCosh, Sandgren interviewed for a teaching position in Corvallis at Oregon State University, where he was hired by Gordon Gilkey.  This was a position that Sandgren would hold until 1986, and one which would provide a strong foundation for his life and creative activities.  Another interesting, early Sandgren work in our show is the painting "Industrial."  Painted about 1950, this work remains unique in Sandgren's career for its use of hard edged line and bright color.  This painting shows an interest in modernism, which many of the artists of this era were evaluating and responding to, in developing their own creative paths.  Sandgren would soon move away from this style of painting, as his own mature and distinctive artistic language evolved.  His style became nature based and moved away from urban subject matter, generally focusing on the landscape, in an earthy color palette.  Sandgren's paintings are often interesting points of confluence, where ideas about art making and place come together, filtered through his imagination and creativity.  Our show presents a wide range of locations in Oregon where Sandgren worked regularly, including: Seal Rock, Waldport, Rogue River, Florence, Newport, Bandon, and Eugene.  You will also want to see the concurrent Nelson Sandgren show at the Hallie Ford Museum of Art in Salem, which runs from May 14 - July 17, 2016.  We do have copies of the new book on Nelson Sandgren here at the gallery. 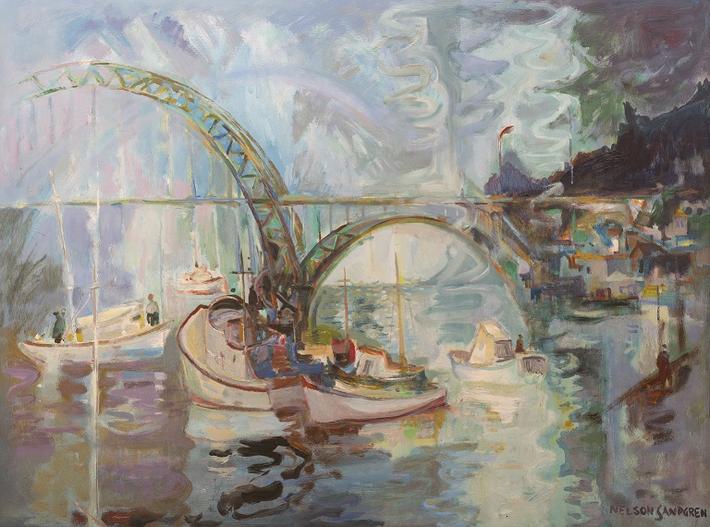 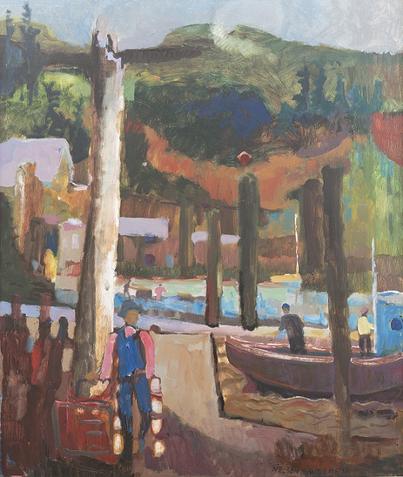 Paintings in Oil and Watercolor from Seven Decades 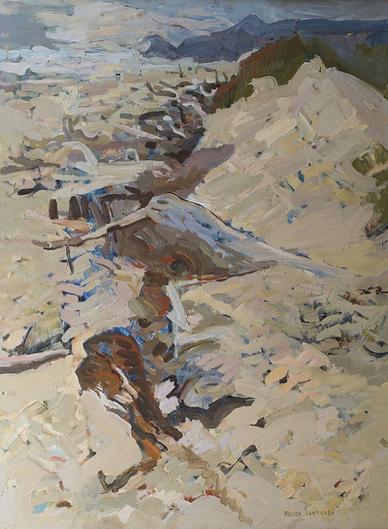 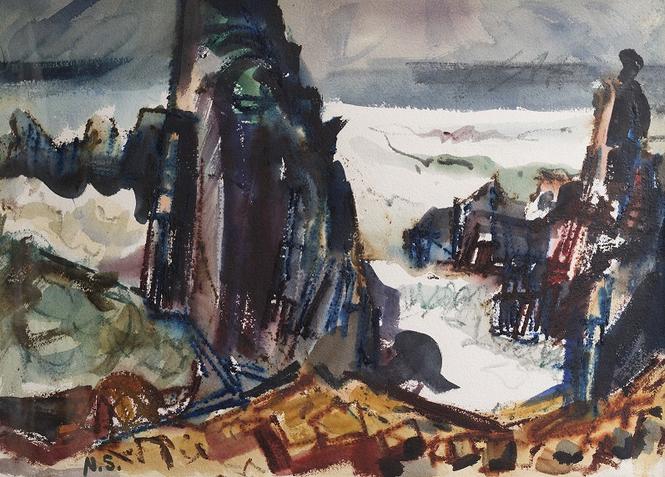 Bridge and Flickering Light at Newport, 1998

Erik Sandgren, painter and printmaker
Roger Hull, Senior Faculty Curator at the Hallie Ford Museum of Art in Salem, Oregon which is presenting the concurrent show, Nelson Sandgren: An Artist’s Life, May 14 - July 17, 2016, and publishing a new book on the artist. 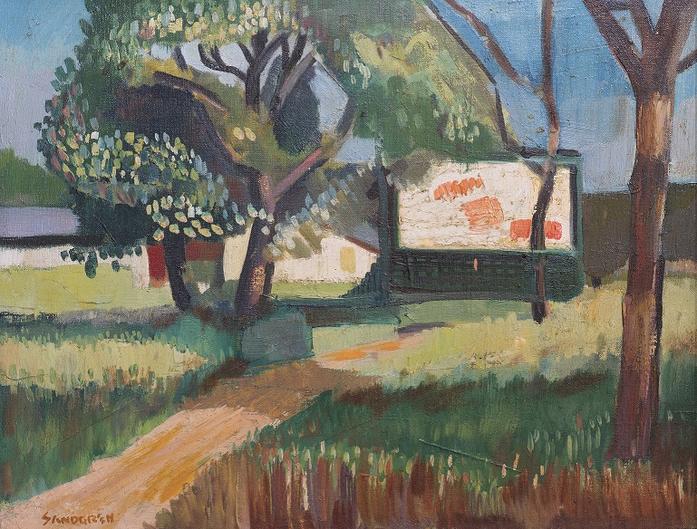 Nelson Sandgren taught art at Oregon State University from 1948-1986 and remains important in Northwest art history.
Sandgren wrote:
"Throughout all my work I have had faith in the object and it has provided constant motivation for all my compositions in oil, watercolor, lithography, and drawing. This interest and faith has fed me a continual stream of ideas, and I have been particularly fortunate, therefore, to experience unwaning desire to work."

Storm? Get to the coast! Grab your rain jacket, stocking hat and a stack of 150 lb. watercolor paper: full sheets clipped to plywood. Toss the sawed-off card-table into the van on top of the old backpack filled with tubes of watercolor and a palette or two, balsa sticks and plastic egg trays full of moist pigments... oh, and the brushes. ...and a sleeping bag! - just in case the weather’s really good for it... just short of rain is best, but whatever... the wind makes for bigger waves. Hope the seas are big and airborne foam swirls around the headlands... oh and the thermos of coffee. Who wants those formula sky washes anyway!  Work in rich patches of color dug out of the plastic egg cartons with a bristle brush. Water spots won’t spoil the painting - they certify it was done on site in the hurly burly of weather and a feeling of utter freedom. Thus, Nelson kept alive his feeling for untrammeled nature - a sensibility never lost by the Chicago boy who came west in the Great Depression.

His watercolors are fresh gestural responses to the great gestures of the western landscape. In the tradition of John Marin and David McCosh they remain father to subject matter while being generous, spatial, visceral and expressionistic. They stand apart from typical associations with technical formulae, precious handling and fine weather scenes.  Their freshness expresses the artist’s relentless commitment to rich color application, risk-taking, willingness to scrub out and redraw, spontaneous use of found materials to apply pigment and discover shapes that produce the big push-pull of compositional painting. Nelson insisted that watercolor be the medium of freshness and suggestion; that it be a medium of visual exploration, surprise and compositional strength.

In workshops throughout the Northwest and courses at Oregon State University Nelson consistently preached what he practiced: not a “look” but a discipline. He encouraged the development of observational skills, fluency in drawing and constant work. He advocated the primacy of drawing as a means to convey one’s individual observations and to explore the visual structures. He emphasized NATURE as the root of self-discovery and the key to avoiding the pitfalls of cleverness, decoration and the cycles of artistic fashion.

Nelson exhibited widely around the Pacific Northwest. His oils, acrylics, drawings, woodcuts and lithographs are in many collections. The Hallie Ford Museum of Art at Willamette University is currently offering a retrospective of Sandgren’s work. In association with that exhibition and presenting Nelson Sandgren’s work in many media (cinematography, lithography, painting and drawing) is a newly published monograph by Roger Hull, senior faculty curator and art history emeritus, Willamette University. It joins his fine series of books, placing Nelson’s work on the stage of Northwest painting in general by documenting his development, milieu, context and influences.

At the University of Oregon, David McCosh contributed to Nelson’s vision a special emphasis on integrating observations of nature with pictorial structure, color ideas and drawing. He provided Nelson’s first exposure to stone lithography and mural painting on a large scale. While in Eugene, Nelson also worked with Jack Wilkinson and Maude Kerns, who introduced so many to the threads of modernism. Andrew Vincent provided a lifelong model for the convivial lifestyle of a painter. After his MFA, Nelson and his wife Olive went to Morelia, Mexico for a year of post graduate work. He worked there at the university with recognized Mexican painter Alfredo Zalce and pitched for a local semi-pro baseball team. He and Olive travelled with the team to parts of Mexico not much visited by Americans. These experiences colored his conversation and study of Spanish for the rest of his life.

Vincent and McCosh recommended Nelson for a teaching position at Oregon State College in Corvallis. Hired by Gordon Gilkey in 1948, he was to teach for the next thirty-eight years  - punctuated by a year of leave back to Mexico in 1950-51 and five sabbatical years of travel and painting in Europe.  On the first of these sabbaticals in 1959-60 he met up with Andrew Vincent in southern Spain. The sabbaticals were generally characterized by painting and study for six months in Spain followed by months of travel around Western Europe by car.
Recognizing Nelson’s capacity to work at scale, Roger Saydack helped match his talent and energies to the Mahlon Sweet Airport mural project at the Eugene airport in 1989.  Erik Sandgren, Carol Yates and Mark Clarke assisted Nelson on the scaffolding in executing the largest mural in the Pacific Northwest: 4600 square feet of wall - painted in situ. Below the undulating glue-lam beams in the main airport concourse you see a synthesis of landscape and pictorial structure that represents an inheritance from McCosh's large depression-era murals for the Department of the Interior in Washington D.C.

Nelson's vital interest in the landscape extends through the work of his children. Both have embraced key principles embodied uniquely by their father and take them forward as underlying concepts.  Jan Sandgren (UO BALD 1994) has contributed influential landscape projects for Los Angeles County, see withersandsandgren.com. Her award-winning designs are persuasive and functional real-world spaces. Erik Sandgren, (BA Yale and MFA Cornell) artist and teacher, responds as a painter and printmaker primarily to mythic aspects of the northwest landscape. Nelson felt himself to be part of a long tradition of artists and art history. Nelson’s own influence now as artist and instructor continues to be felt: his imaginative responses to nature continue to inspire. 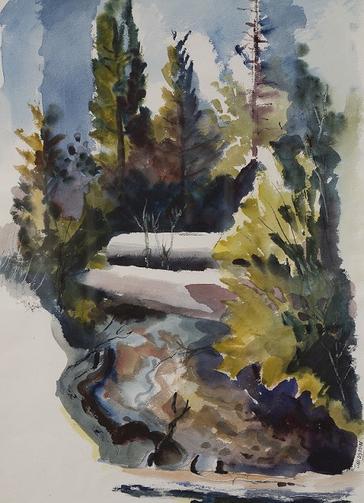 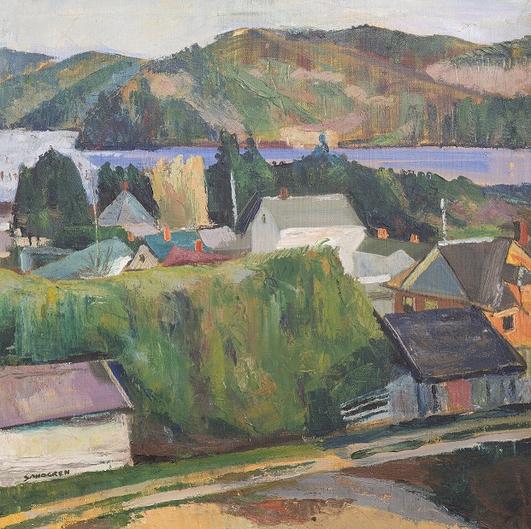 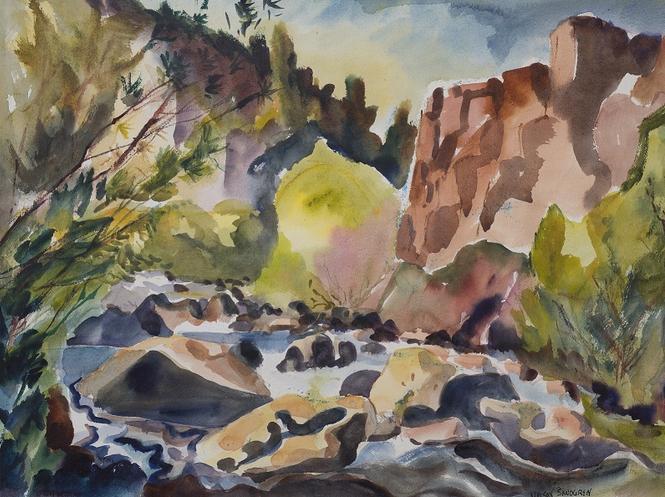