Raymond Grimm (1924-2012) was an early leader in the vanguard of artists who transformed Portland into a center for the ceramics and glass arts. This retrospective exhibition spans his wide-ranging career from the 1960’s onward, and includes his work as an artist and as a collector of other people’s work.  Grimm taught ceramics at Portland State University for 33 years influencing many of the ceramic artisans from the Northwest region. His inventive spirit led to innovative new pottery techniques and glazes that focused on process, and explored the ‘dialogue’ within the material. He would demonstrate his techniques for students in his PSU clay studio. Grimm created exceptional yet functional, beautiful ceramic sculpture and gained a reputation for creating the ‘perfect’ teapot.

“I was making each piece as an individual piece, one of a kind. That’s just the way I am (I tend to go for the feeling or an impression). The market place never determined my direction. But at the same time I tended to make ceramics that were useful, functional...” Ray Grimm

Grimm earned his graduate degree studying with F. Carlton Ball at Southern Illinois University, which provided him with the foundation for his technical skill in clay, and where he began his fascination with combining different materials in a collaborative manner. He became an important influence to the ceramic community in many ways. He built and established the first hot glass studio in Oregon, he joined fellow ceramicists, guided by the Korean kiln master Hok Pae, in building an ancient Gilgama kiln in the Manning hills, and he was instrumental in bringing visiting artists, such as Daniel Rhodes and PeterVoulkos, to the area.

Grimm received many awards in his lifetime. He exhibited his ceramics throughout Oregon and beyond since 1957, and has work in many public collections, including the Museum of Contemporary Craft, the Hallie Ford Museum of Art, the University of Oregon Museum of Art, and Portland State University. His architectural and public commissions in ceramics, and wood sculpture, can be seen throughout Oregon including the regional resorts of: Mountain Park, Sunriver, Salishan, and Skamania Lodge, as well as Portland’s Pioneer Courthouse Square, and many area churches. 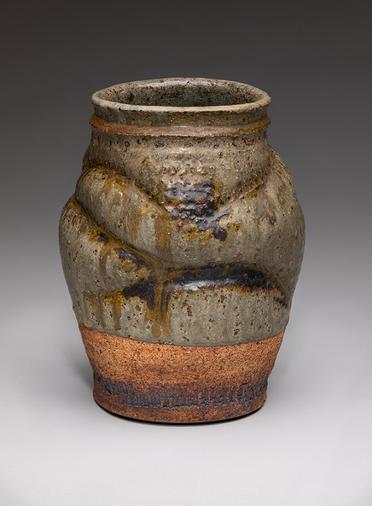 Artist and former student, Dale Rawls, will speak about Ray's work at 2pm 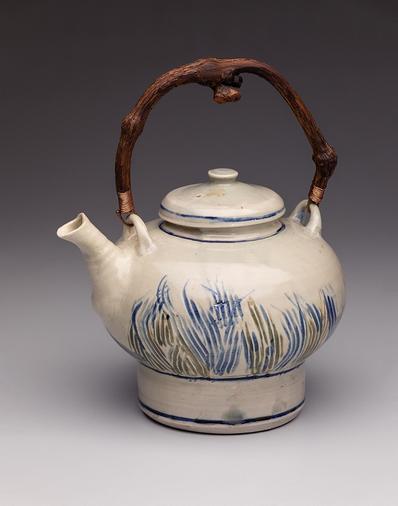 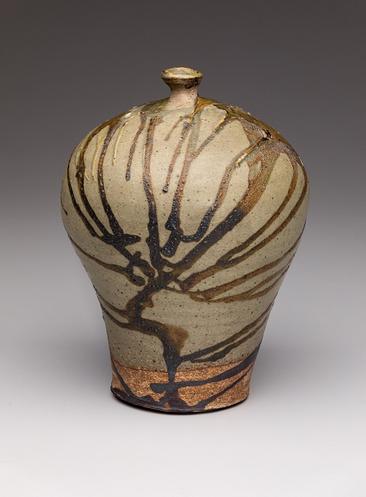 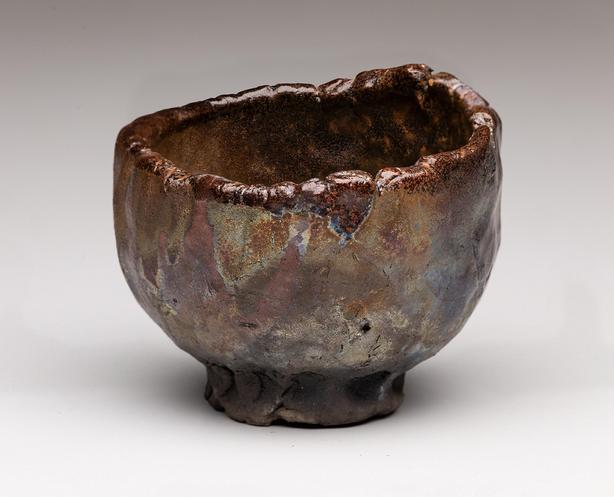 Garth Clark’s writings about Mid -Twentieth Century ceramics describes an era of experimentation, with the loosening of boundaries and new freedoms. This ideal was one of the qualities which excited crafts people like Ray, whose deep dive into the character of the materials with which he worked, brought such vitality to his work.

The ceramics department at Portland State was a kind of cross-roads starting with the early sixties. Ray would hear of a well-known ceramic artist who was doing workshops nearby and he would make sure they arrived in Portland, gave a workshop for his students, and usually an additional workshop that was free and open to the public.
The public came!

Notables such as Peter Voulkos, Dan Rhodes, Paul Soldner, Peter Lane, Clayton Bailey, Finn Lynggaard, and countless artists enlivened the offerings that Ray arranged at PSU.  The visiting potters usually ended up staying at the Grimm’s home during their visit and would often kindly leave a beautiful piece of artwork as thanks. Much of the work in this exhibition is from those visiting artists, other works are former students and contemporaries.

Ray was very transparent as a teacher. He maintained a studio at PSU so the students could see him working and watch the process. He always tried to be straightforward and honest, nothing held back. His classes were tough to get into, and always filled to overflowing, but Ray got a lot of enjoyment out of helping the students achieve their goals.