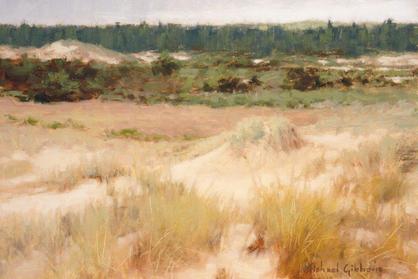 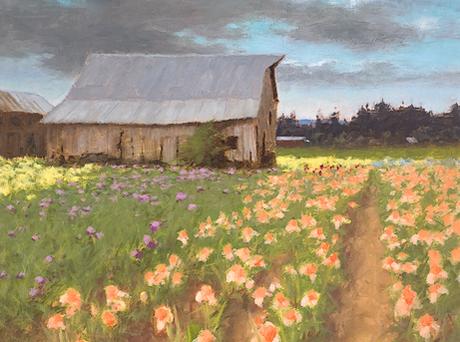 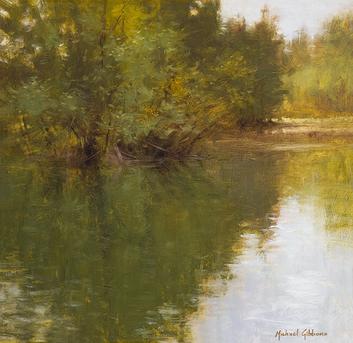 "Mr. Gibbons has interpreted land (Oregon) we all know and love, giving it back to us in a form we can understand."

Painter Michael Gibbons is one of Oregon's cultural treasures.  Born in Portland in 1943 and a 5th generation Oregonian, Gibbons has been actively painting the Oregon landscape for more than 50 years.  Self-taught as an artist, he began painting in oils while still in elementary school, and soon attracted the attention of the Oregon Society of Artists, who invited him to membership at age 16, the youngest in that organizations history at that time.  He  was awarded all honors in the Scholastic Art Awards competition, and knew from an early age that he would devote his life to painting.  Gibbons made the decision to forsake city life for the wilds of the Oregon coast in 1978, moving first to Yachats, and eventually settling in Toledo, Oregon, in 1981, where he continues to make his home.  This move to the coast was a significant turning point in Gibbons life, art-making, and career; giving birth to his reputation as a regionalist.  Portable field equipment, which allows him to paint outdoors directly from nature, solitude, and a singular focus on portraying a limited geographical area in his art, have fostered his deeply personal and intimate portrayals of the land he and his wife Judy have called home for more than 30 years.  While Gibbons has successfully painted and exhibited in England, France, Ireland, Scotland, and the American Southwest, he states that, "My most powerful work comes from here where I live."

Michael Gibbons has made a lasting and significant contribution to the history of landscape painting in Oregon.  The singular and consistent focus he has shown in producing a sizable body of work representing a limited geographical area of the Oregon coast over a time span of more than 35 years stands alone in Northwest art history.  This concentrated approach has allowed him the opportunity to capture the always changing appearance of the coastal landscape in his paintings, which Gibbons acknowledges in saying, "Much of which I've painted is gone.  It doesn't exist any longer, it's now painted history in art."  Another unique characteristic of Gibbons art is the way he has greyed and refined his color palette over many years to more accurately express the  beauty of coastal light in his paintings, as well as the subtle nuance of the winter landscape.  There is also a remarkable attention to detail in Gibbons paintings, which co-exists wonderfully with the sweeping, grand vistas the Oregon landscape is so deeply loved for.  Of particular interest in his many Yaquina Watershed and Arnold Creek Estuary paintings is his lovely rendering of the texture and color of the native coastal grasses, and his ability to capture the inner life and poetic quality of the landscape.  Interestingly, many of Gibbons paintings are produced within a few hundred yards of his front doorstep. Working directly from nature in his signature, painterly style to create quiet and intimate views of the Northwest landscape, Gibbons continues to produce art of high quality and genuine beauty.

Michael Gibbons has had solo exhibitions at the National Arts Club, New York, New York; the Frye Museum of Art, Seattle, Washington; the Maryhill Museum of Art, Goldendale, Washington; London, England at the New King's Road Gallery and The Gallery at King's Lynn, England.  Gibbons is also represented in many distinguished corporate and private collections, at home and abroad.

Michael Gibbons is the co-founder of the Portland Art Museum's invitational plein air painting event, which takes place every other year in the downtown Park Blocks.  Along with his wife Judy, he co-founded the Yaquina River Museum of Art in Toledo, Oregon, in 2002, as well as Toledo's annual Art Walk, held on Labor Day Weekend and now celebrating its 21st year.  Gibbons was profiled on Oregon Public Broadcasting's Art Beat in 2001.  He is also the recepient of many artistic honors and awards, and is in demand as a juror for plein air painting exhibitions nationwide.

Currently on view at the coast, is a special exhibition of 35 Michael Gibbons paintings portraying the Yaquina Watershed and in particular the Arnold Creek Estuary, both  located in Lincoln County.  "Yaquina," a comprehensive traveling exhibition of paintings done in this watershed in the Pacific Northwest over a period of 19 years is up through January 1, 2015 at the Pacific Maritime and Heritage Center, Newport, Oregon.  Steve Wyatt, Director of the Maritime Center is quoted as saying: "I believe that art can reflect history and that Michael Gibbons "Yaquina" documents not only Gibbons work and evolution as an artist but is reflective of Yaquina Bay, and an urgency to capture the beauty of the Central Oregon Coast."

Please join us in celebrating the creative and poetic vision of a true Oregon Original, Michael Gibbons.